The Annex is open—and Interfictions 2 is almost out 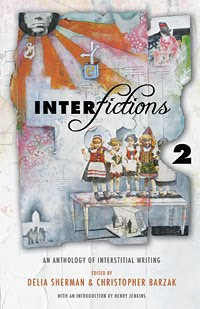 Appropriately, even the characters on the cover* of
Interfictions 2 refuse to stay in place.

And not every tale editors Delia Sherman and Christopher Barzak wanted, would fit between the covers of this anthology that contains 21 delightfully unruly stories by authors from around the globe, so the Interstitial Arts Foundation has now opened:

"The IAF Annex, an online showcase of exclusive interstitial works. One part anthology, one part gallery, one part performance space, and one part everything else, the Annex is the IAF's grand exhibition hall."

Waiting for you already are:

"To Set Before the King" by Genevieve Valentine