Every member of the dasyurid family has fascinating feet, with toes, claws and textured skin that suit the lifestyles of these meat- and insect-eating marsupials.

And those in the Sminthopsis genus, commonly called "dunnarts", like the one who owns this foot (a minute foot, the body from toe to base of tail being 70 mm long, tail length 70 mm, and total weight 14 gr) have the added attraction of being "notorious". 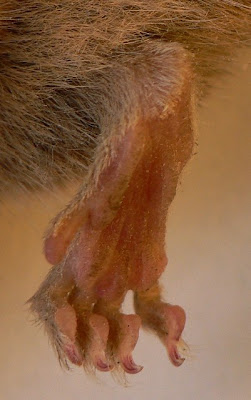 "Sminth, I say."
I'm tempted to say that this foot belongs to a white-footed dunnart as they live in the area, but I don't think it does, so I'll pass. There are many identifying particularities that distinguish one species from another—such as ears. "Big" is not a good description, by the way, though it is often used. Ear to head ratio would be better. This dunnart's ears are deeply notched and can be laid back against the head, but are nowhere near the size of some of the other dunnarts'. The tail is another identifier. How is the fur distributed, and is the skin scaled or not? What is the tail shape and length in proportion to the body? This one's tail looks remarkably like that of many dogs' who don't have their tails docked. Long, well-furred, and slim. 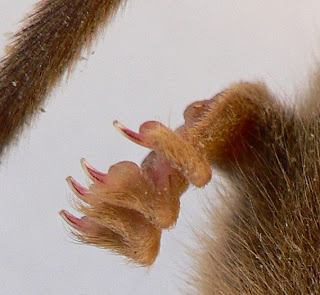 Dunnarts are known as primarily insectivores, but that too is rather sloppy. The main dish on offer here is black spiders, and from what we hear, the dish is relished. And spiders hate to be called insects.

The hind foot's big toe (called a hallux) is one of the identifying features that show whether a dasyurid is arboreal or terrestrial, or both. Some prefer running and some, hopping. And by hopping, they can rival popcorn.

Whether zoologists would say this foot and tail belong to a species that climbs or not, it does. It's our nearest neighbour (mammalian, that is), up in a narrow space below our roof—and is a night hunter of furiously fast action, and very heavy tread.

Luckily for them, even well-off dasyurids aren't tempted to shove their feet into shoes. This one's mobile big toe is as flexible and useful as the big toe of many working people throughout history.
Posted by anna tambour at 7:30 pm