A circus of common language?

The tent is unfolding (in my imagination) and it covers the world.

Modern English is so much richer than 'Standard English', bro. I applaud the OED and the Collins English Dictionary's inclusion of some Hinglish words in latest editions as a beginning, but the words they are including are those that TV and movies have put into the commons. That's language passed by boardrooms. What about the anarchists?

As I complained the other day, there are people who are who are having too much fun with English.

'Nearly everyone in Singapore speaks more than one language, with many people speaking three or four. Most children grow up bilingual from infancy and learn more languages as they grow up. Naturally the presence of other languages (especially various varieties of Malay and of Chinese) has influenced the English of Singapore. The influence is especially apparent in a kind of English that is used informally, which is popularly called Singlish. Singlish is a badge of identity for many Singaporeans, and, as you can see from Talkingcock.com, there are some websites that are written in it. Many bloggers use a good deal of Singlish in their writing too. As is the case with many contact varieties, however, Singapore English is often seen as wrong. In 1999 an official campaign began to encourage Singaporeans to use Standard English rather than Singlish.'
- Anthea Fraser Gupta, School of English, University of Leeds, Singapore English

The Singapore Government's Speak Good English Movement is a wonderful resource. See their Glossary of Common Singlish Items and Their 'Good English' Equivalents
(They put the 'Good English' in quotes.) 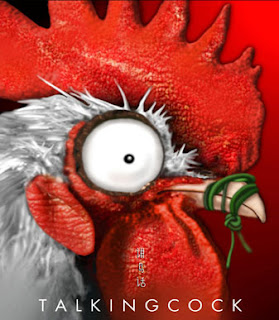 This is the logo for Talking Cock, a Singlish site. Tellingly, the name for this graphic that I've pasted to copy here is TCShutup.

So, you unruly speakers, writers and thinkers, you who have seized English, corrupted it, and are adding so much more — do you think it's worthwhile to promote an enriched flexible international common language, with an enlarging of expressions to suit the purpose, and a flexibility that is recognised as legitimate? In the USA , the 1967 Israel/Egypt 6-Day-War made being Jewish cool, and using Yiddish words and syntax even cooler. As "A reader" wrote in a customer review in Amazon for Leo Rosten's Hooray for Yiddish: A book about Yiddish, Even though Yiddish has not replaced English, it definitely contributed a lot.

Do you think that there's a chance that people the world over could adopt a rich common, fluid language that spans informal expression and more formal ways of communicating — synonymous with, say, food? What's happened to food could happen to our common language, as it's ironic that people in Anglo countries have expanded beyond our shores in what we put in our mouths, while what comes out of their mouths is as limited as a McDonald's menu. In every Anglo country, the number of words used in contemporary expression is shrinking, and that shrinks thoughts. Since English is the world's common language, is it time to have fun expanding the common usage of words that express the world?

When Indira of 'Mahanandi' started a Food Blog Event and called it Jivha for Ingredients, she tossed a word into the international pot. Nothing expresses, in the English of Cromwell and Snoop Dog, plum duff and wowserism, burgers and 24/7 convenience stores, the complex and sensual meaning she gave to this word: Jihvā the Sanskrit word means taste, desire and deep longing. This powerful word also represents tongue and taste buds.

This Food Blog Event she started is, by the way, uh . . . I don't want to say 'to die for', but (you supply the exclamatory word)! it makes me salivate, especially the JFI Dal Event hosted by Sailu. Dal is a metaphor for what I'm seeking — you don't have to grow up eating dal to learn that, when you crave comfort food, dals can be juuuust right.

Sailu, by the way, is not only a cook's cook, but explains recipes wonderfully to people who have taste but no feel. Her homemade corn chips, homemade tomato salsa, and homemade sour cream are thought up and produced in the spirit of the commons that I mean with language itself.

So should there be a Circus of Common Language? Could there be a Jivha for Communication? Is anyone out there who would like to contribute? Would this enrich expression, or in some respects flatten natural local expression, dudes?

Woops! Thank you, Tanuja. It's fixed now, with apologies to Sailu.

English is already an incredible polyglot stew, combining bits of Celtic, Old English, the Latin-based "romance languages," Yiddish, and other borrowings. Slang keeps on mutating, with more borrowings (remember Sixties Americans adopting "fab", and possibly "groovy"?), and the remnants of that nasty old Empire go their own ways. [That goes for both the Brits and the Romans, actually, and maybe more learned types could apply it to the Austro-Hungarian!]

Maybe it's just because I review fiction rather than plowing through prose written in Officialese, but I'm not that worried about the state of the language. (I just worry about most everything else....) Trying to solve large crossword puzzles also shows that polyglot thing. Though some annoying compilers insist on setting clues that involve Brazilian mining towns, obscure beasties or flora, and other terms that seem to reside only in puzzle dictionaries, puzzlers are used to French phrases, German words, bits of Latin and other less esoteric stuff. And I don't think there's all *that* much call for "purity of the language," as happens with other tongues -- English hasn't been remotely "pure" since at least 1066!

Faren, your letter was just the meal I needed. Yes, English is already a stew, sometimes for odd snobbish reasons,such as the Anglo colonies (Australia, and how many uncouth others?) calling napkins "serviettes". And it's a great thing that English isn't inflicted with purity inspectors.