Interfictions - the excitement of finding the broken in the spaces between 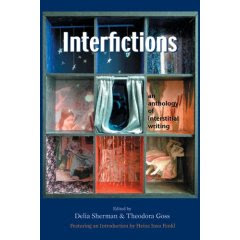 Read what the editors, Delia Sherman and Theodora Goss, have to say about this misfit.

Their discussion reminds me of some words in a paragraph that I wish would appear guerilla-like in notebooks, in the middle of stories, dreams . . .

I read the paragraph after enjoying a book so much, I decided to read its introduction. The author is someone who writes what I think is some of the world's most pretentious drivel; but as an editor and introduction writer, is as impossibly wonderful as a working magic wand. And though she speaks of English literature here, what she says has universal relevance, especially since the teaching of writing fiction has turned into a pandemic.

"I found, reading in bulk, that I was developing a dislike for both the 'well-made tale' and the fleeting 'impression'. Manuals on how to write short stories, and much criticism, stress unity of form, stress that only one thing should happen, that an episode or incident should be developed or an emotion caught, with no space for digression, or change of direction or tone. Much of the competent, and more than competent, work . . . has an ultimate stiffness—it is diligent, it is wrought, it is atmospheric, but it can be mildly admired and taken or left. Many of the stories in this collection break all the rules of unity of tone and narrative. They appear to be one kind of story and mutate into another. They make unexpected twists and then twist again. They pack together comedy and tragedy, farce and delicacy, elegance and the grotesque. The workmanlike English story is bland, and the great English story is remarkable for its lack of blandness. The workmanlike English story is even-toned and neatly constructed. The great English story is shocking—even the sparest and driest—and hard to categorize."
- A.S. Byatt, The Oxford Book of English Short Stories, Oxford Press, 1998

Whose work (which I like, for the most part, although sometimes it makes my brain hurt, and not in a good way) is almost always interstitial in one way or another. Although I can't really imagine her making common cause with anyone, somehow. There's something about the way she writes that makes the cat that walks by himself look downright social.

We're not officially out until April 30, by the way. Interested parties can pre-order on Amazon.com .