Homes: temporary and permanent as permanent can be 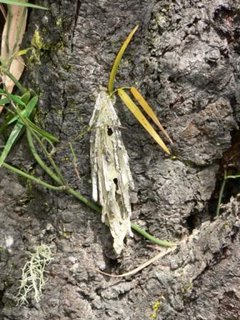 TREE: Persoonia, though I don't know the species (there are approximately 100). Commonly called Geebung, this tree, like many other geebung varieties, has edible fruits with one large seed in each berry. They are astringently sweet with a little kick of turps, crunchy as gooseberries but without tartness. It's always an exciting experience eating them, for they have such a range of personalities, from tree to tree and berry to berry—or more properly, drupe to drupe, as are cherries and olives and peaches and loquats, but that word has an unfortunate dry sound, doesn't it? 'Drupe' should mean desiccated through neglect, like a dusty orange, hard and hollowish, or like so many people.
VINE: Eustrephus latifolius var. angustifolius, commonly called Wombat Berry. The berries are the size of peas, and ripen from apple green to bright pumpkin orange; fleshy, crunchy, and each contains a few smooth and shiny black seeds that are almost impossible to dump from pockets because they look and feel like seeds that fairy tales things grow from. The fruits are delicious—a cross between star fruit and pumpkin. I think that I would still think they taste like tropical pumpkin with crunch even if they weren't pumpkin coloured, but I don't know. I saw them before I tasted them, so they need an untainted taster to taste without preconceptions. The root of the plant is edible but I've never dug one up.
PUPA CASE: Guessing here—one of the Psychidae (commonly called bag worms or case moths) ?