The colour of a parrot's tongue 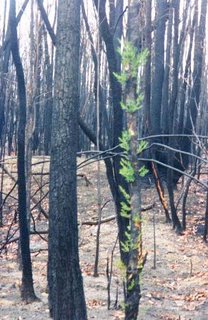 Yesterday fire was predicted and though not a whiff of smoke stung our nostrils, the air was so hot, the parrots sat in the shade looking like old-fashioned generals, shoulders out, wings drooped slack. They panted so much that they gave me another epiphany: parrot tongues come in different colours, just as cattle tongues do. Some of the king parrots' tongues were pink as a Barbie doll's skin, and others a charcoal the colour of these burnt trees.

They reminded me of so many epiphanies, and then they reminded me of a time when I wrote a diatribe to an editor of a magazine that is one of those coffee-table caring for the earth types. She had just rejected a story of mine ("The Eel") because, though she said they liked it, the story was "about animals". She invited me to send them something else. Of course I would never send a diatribe to an editor, nor would I ever whinge to someone about an editor. But I wasn't wise enough to not have written this just for myself, and to share this with you now. Shhhh. It's for your eyes only, darlings.

A walk in the forest

We were stopped momentarily, somewhere on the long spine of Central America, and he dragged me out of the train though it could have taken off any second. We ran down the rocky slope till we were close enough for me to see.

"It is a cow," I admitted. And then and only then, we ran up the hill, literally catching the train and swinging on.

It was a foolish thing to do, jumping out like that, but only moments before, I had said, "Look at that bull," and he had said, "That's a cow," and I had said, "Only bulls have horns," and then insisted on that fact.

But the pretty cow on the cheese packages, and all the cows of every picture book and cartoon from my earliest memories, are hornless. Only bulls have horns, until that day.

Another hemisphere, another continent. Visitors from Sydney, to our own little valley. "Why don't you mow the grass," one of the two pre-teen girls asks.

"Them? Ah Gawwwd, it's having a shi—don't step there, Hailey!"

My dog sidles up to Hailey for a cuddle, and she runs away screaming, "It touched me!" and her mother says, "I was just the same."

My dog looks confused, and comes to me to lean her body up against my leg. By this time, the fear performance has been enacted so many times that I am pissed off.

"It's not an it. Her name is Rosie, and you've hurt her feelings."

But by now, this is as inappropriate a submission as a purple prose romance, because it is probably going to be about animals, and I shouldn't do that because it fits nowhere. Now, a piece about ecology, i.e., our relationships with nature—if I wrote about needing to experience nature in a sensitively built environment, to center myself after a long week of being basted with respect, but somehow still needing this centering, that would be in the box, but if I wax on about the surprise of discovering a perfume that rivals Hermes in sexy muskiness: the smell left in your hands after handling a glossy male dung beetle, where's the return postage . . .

This may sound churlish—that I can't take rejection or not fitting in—yet rejection is just air to a writer, and if a writer chokes on it, then that writer should get out of that atmosphere altogether. It is rejection of the topic that offends me, and pains me, as in walking through the "genre" (does a genre kill discovery, or is it simply the funeral for the death?) it is impossible not to concuss in the forest of perpendicular pronouns.

There is much writing to be found in the animal spirit / shamanism categories, as much interested in the animals as cartoonists who draw toothy cows. As interested and observant as the local wild animal carers' society that told us that our local wombat population could not be moved, though it had undermined our creekbank to the point that huge trees fell into the creek and land washed away in house-plot-size chunks—that the "community" of wombats (a hilarious joke to the very uncommunal wombats) would be disturbed if moved, as they would not get along with other societies. As observant as the writer of the government-funded bible of wildlife in Australia, which states that wombats don't dig in creek banks. Fantasy-spinners, comfortable in their non-observer status, passers of fantasies-as-truth onto the unwary; but the norm nowadays that regards the quiet, persistent observer and recorder as a sentimental archaism.

Last night, I was steps away from yet another lion at that so-familiar waterhole, and only when I walked away and slammed the door on the droning commentator, could I listen for the drag, hop, drag, of a kangaroo just outdoors, hear frogs bonging in the billabong, notice the owl as it hunted silently against the lit window. Too precious-cutesy, too yawnable? What about the story that is also true, about wandering on a tropical island just building its paradise, and coming across a crowd of young guys, laughingly taking a break from building. They were holding a pangolin, all scales and fantasy, and one young man was pinging the pangolin's head with a ballpeen hammer. Just like a cartoon, the pangolin's eyes were crossed, then rolling. That isn't uplifting, I know, or hopeful, but it is about people, modern people who are as far away from animals as most of us. Some of us collect snakes and shove them into jars like so many forgotten rubber bands (my most lasting memory of my time in a famous natural history museum), some of us use nature to bring us back into ourselves, but the setting has to be as juust right as an English garden, as good as Victorian children. As predictable as what we know so we can use it as a frame. And then we can all be Thoreaus. We are so limitedly observant. We are so limited period, so why limit ourselves to replaying our own emotional dramas, and not exploring the worlds of others?

Nature without animals is like cooking without food. Or cookbooks centering around chefs, but come to think of it—that is the modern cookbook. Ecology without animals is like a forest of Environmental Impact Statements written by pale, computer-fed wonks. And mind-body-spirit in the context of ourselves is the modern universe spinning round the earth.

Why are animals persona non grata? Is it the worry that, in speaking about animals, there will be a treacleish heartwarming, a verbal velvet painting with big eyes? That there will be a flooding of "my remarkable pet " (as opposed to "my fascinating me") stories? Or is there a WC Fields level of worry about humans sharing the stage? It surely cannot be that we know, when we are at such primitive levels of knowing that there are still scientists arguing about whether we are the only species to have complex emotions.

I would prefer the haiku approach to nature writing. Leaving as much as possible, the 'I', the human, out of it. Observing, recording, experiencing. But not centering the revelation in the revelation of the revelation. Too many revelations lie undiscovered because we already know.

I am lobbying here shamelessly and rudely because so many of my epiphanies have come from those unspeakables—the animals. Birds I can't see, they are so high in the trees, tell me what eucalypts are flowering, as they drop the blossoms they have chewed. Before a fire, the bush cockroaches run in a particular way.

The observations that other species make enhance our own, if we notice to notice what they notice. A lyrebird living near us added the sound of a fence-builder to her song, the clear ring of hammer against metal reverberating amongst her collection of other birds' voices.

The epiphany that made a shiver run down my back with the exhilaration of it was when a cow was so sick that I hand-fed her, literally putting the grass in her mouth. I reached in and her upper palate felt like a beach, the kind where the sand lies in ridges. But she had no upper teeth. I had always known cows have upper teeth, because they do in cartoons when they smile.

But these are just mullings that don't fit anywhere, because we know animals don't fit. If we talk about animals, we might get into those tricky discussions of whether they think, feel, communicate. All that anthropomorphic stuff.

Let's just get back to the positive stuff of interacting well with the spirit of the environment, the flora and the fauna, keeping 'the' there, in its proper place.

This is all out of place, I know. There is no excuse. I suppose I am not centered when it comes to leaving "animals" out. And I never want to be.

At least I can end this on a people note, and with uplifting hope. Those two girls—they're animal-crazy now. And they are learning about other species up close and mucky, only about twenty years earlier than I ever started to know the difference between reality and cartoons.

" The only real voyage of discovery consists not in seeking new landscapes but in having new eyes" - Marcel Proust, quoted by the same Institute whose guidelines for submission included the quote prefacing this diatribe.

What a wonderful rant! Makes me wish mine weren't just raw anger. And how right you are! I may only experience animals first-hand via one large housecat and the birds that come to my feeder, but even I know they're thinking, feeling creatures. Wish I could say the same about some humans....

What a wonderful essay, Anna! So true, thank you for saying all of this!

Faren, raw anger? I've got to see it! Sling some of that hash my way, for I've only seen writings by you that are weighed, measured and baked golden.

And to both of you, many thanks. I got indigestion after posting this. It's a scary thing, the temptation that a blog dangles, to expose visceral thoughts.