There are a rare few books that read as if they were struck into being by lightning, they’re so timely. And there’s no telling when this timeliness will strike. Just out in paperback is a novel that first came out in hardback and e-book editions last year, but over the past few months, days, hours--reads so newly struck, so uncannily relevant--
Yet---
Cut the anchor!
Only madness can explain why something so perfectly built for a storm, this storm here and now, has been shackled, not even to a real anchor but a mass of fouling--the dead weight of one of those great books people should have read. 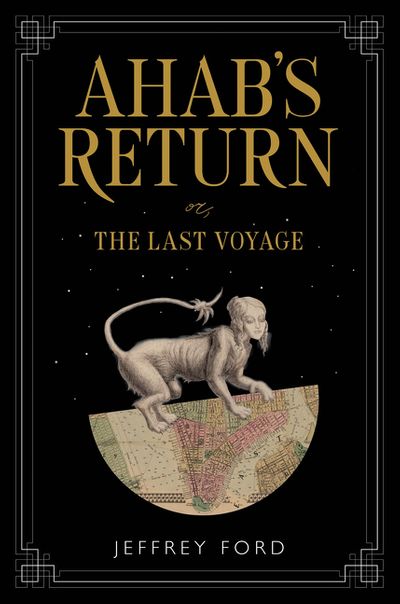 Ahab’s Return: or, The Last Voyage was launched a year ago, and though the title and descriptions naturally lead you to believe this a spinoff of Moby Dick, that’s not only wrong, but not only has Jeffrey Ford himself had to say you don’t have to have read that tome to read this, but, Oh, the irony. In Ahab’s Return, an insider, a real person fictionalised in Moby Dick says, ’“That book is a farce. I’ve read it.”

The ‘I’ is George Harrow, the narrator. also a writer, but unlike Ford, he’s a star reporter, an expert in a very particular art and craft.
“You might be the finest confabulator on this godforsaken island.” [says his boss, the editor of the Gorgon Mirror]
His take on that?

“Whereas another might have taken the term to mean liar, I understood it to be an appellation of artistic prowess.”

New York at that time needed no sensational tweaking to titillate, outrage, horrify readers. So Harrow’s readers wanted entertainment, nothing more. And he’d lived as shallow a life as possible, till Ahab turned up looking like something from the dead, but very much alive-- and greed for a sensational story made him a story:

“My detractors didn’t realize that I, George Harrow, was not a do-gooder, an abolitionist, a friend to the downtrodden, a lover of Catholics or the sons and daughters of Africa, nor was I in league with the idiocy of the Know-Nothings, indiscriminate haters of anything other than themselves. No, I was merely an opportunist”’

So our fearful reporter wasn’t giving us hokum when he said:

“It was said that Malbaster was not born from the womb of a woman, but instead coalesced like an angry storm cloud during a riot in the Five Points brought on by nationalist factions attacking a dance where Irish and colored mixed . . . Malbaster, an evil for the ages. I saw him as more a petty criminal with a murderous streak, who used said intolerance as a means of financial gain.”’

No narrator can pick the core of the story they tell, so I'll say that from my pov, it's Seneca Village. There is a manticore in this novel, a killer of marvelously oddball tooth movement, yet it is a banana slug compared to the efficiency of erasure of a place with such significant history that, like Belsen, all you'd need to say is the name.. If only they weren't blacks who owned land and had the right to vote, the atrocities visited upon them as they were dispossessed for the rich, would be spoken of as 'biblical' by Americans. I knew nothing about Seneca Village's tragedy before this novel, yet history does, as it keeps repeating itself, Yet who’s to know if history’s grassed over?
This novel is, I think damned for some time now, and periodically ever after, to be so relevant, it's creepy, and fascinating. Indeed, from the first paragraph, it's a veritable squid-hook of a multi-pronged approach. Bad stuff and weird shit happens. Truth is caught in a classic quicksand trap. A mythic beast can still chew through a man's neck fast as a woodchuck could chew corn.
But the main thing is: Jeffrey Ford's tale telling is pure, old-fashioned joy to read--and proof that a novel can be enthralling and a page turner of suspense as well as being a cattle prod of a stimulation to see what’s happening, this very moment, around us and in places we’re not supposed to see, including history..
He delights in throwing readers into different times and places (I recommend, in addition to this book set in New York City in the 1850s, his The Portrait of Mrs. Charbuque, set also in NYC, but in the 1890s.) You will feel that you are in wherever he throws you because he so much lives there that he's walked the streets, though they be ghosts now. You will never find, in any Jeffrey Ford confabulation, the slightest whiff of that cheap seducer that turns characters into generic jokes--the movie script. Yet his constant state of curiosity and his adventurous mind has made him a magpie..
There will always be some expertise for the curious and curiouser, some unusual state of being, creature, condition--something that he throws into the tale because it naturally, belongs there, or will belong--for his fiction, no matter how close the relationship between reality and the imagined--is never affected, never played for the superficial shock, never, thank the gods, 'quirky'.
He must have fun playing, too. I loved his laziness, that sitting back and letting another storyteller do all the work. This is how Wodehouse got more rounds of golf in, playing while Mulliner talked himself hoarse at the clubhouse bar. Ford’s guy not only takes on the whole job of narration, but he treats us to excerpts from his own writing, about which, though he’s a pro, he’s both embarrassed and proud about, and forced to defend.

“I’ve got years of experience investigating stories.” [he says]“But why do you investigate them when you’re just going to grind them into a spread of fiddle-faddle?”“Don’t you understand that there can be a certain truth in fiction?”

I didn’t mention that there are so many passages that I wanted to revisit, I had to buy not only the hardback when it came out, for the physical pleasure of reading, but the e-edition because my hard copy started looking like a porcupine.

(and finally, an apology. I love Jeffrey Ford's writing, yet this novel stands out as particularly important, a milestone of a novel, something that belongs with Dos Passos and Cather, Sinclair Lewis and Dreiser. I would hate for it, so readable, so unpretentious, so necessary, to miss the readership it deserves. And so I've wasted many hours and many drafts composing what in the end, I flung upon this 'page as a matter of urgency, as another mention and recommendation, for every one counts and is necessary in this growing storm.)

But is this novel even a novel?
Ford has often written of something unbelievable but true, a lifeform that's no myth, something that looks like one thing but is something else. This time he's created that very thing--a historical novel that's being born again, faster and faster, as breaking news and news that doesn't break but lives like a guinea worm, under the surface, but unerring in achieving its dreadful goal.
Posted by anna tambour at 4:32 pm No comments: