Do you feel as Donal Shaun Hercule Poseidon put it? "That's all?" Donal asked. "Is there nothing more?"

Now when to read news is to feel bathed in toxic sludge; when time is commonly cut into measly little parcels; do you feel as so many do, one with Donal: "It was as if the whole of his insides were writhing in an unnatural manner, and he often felt as if he was choking...He wanted only to fling back his chair, leave the building and run forever."

Do you also feel that timeless conflict of meetings--making you imagine murder while also wishing you could make yourself disappear? Do bullying cowards take up all your air; and do you feel scorched as fear of the other, the unknown, fear of a new thought is being stoked to the ambience of hell? But hell, who has time to think let along daydream. And what if someone finds out you actually contemplate? In Oothangbart where Donal lives, even the wonderful and new is viewed with the alarm of Chicken Little.

If you feel as choked by all this even though you don't live where Donal does, in a town as impossible to spell as Woolfardisworthy or Poughkeepsie (Oothangbart is also renowned in every citizen's greeting for its perfection and exceptionalism), now there is no better antidote than a little unassuming book published last year--a book that not only identifies but crucially, frees. 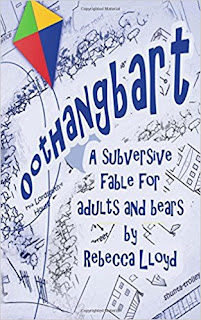 published by Pillar International
"a teeny-tiny independent publisher based in Limerick, Ireland"

Oothangbart, a Subversive Fable for Adults and Bears by Rebecca Lloyd could be called “Orwell’s Animal Farm for the Age of Team Players” but it is so much more. The gripping solution in Oothangbart is imbued with the spirit of Eleanor Roosevelt, who was not only the driver of the UN's Universal Declaration of Human Rights, but who said, "You must do the things you think you cannot do."

Simply but powerfully written in a wholly natural style, but one with so many parts I want to read again that my physical copy bristles with pink slips (like all Steve Aylett's books, which are rife with perfectly put, often tragically funny aphorisms about modern society), no reader of Oothangbart should be embarrassed to admit that what happened to me, does to you. When I finished the last page, my cheeks were literally wet with joy. This book is not just about society but friendship, love, revolution: kites, not flags, oh my!

Oothangbart, a Subversive Fable for Adults and Bears is a mess of a title. Who can remember that? But soon, enough, subversion insidiates, for this story is our very lives: a complex metaphor for so many parts of society, from the social escalator of success for the successful, to the fear and aversion to the different and foreign that I've had a hard time writing anything about it, for the thought "That's positively Oothangbartian" has hit me constantly since finishing it, and I've been tempted to share these parallels. Not that you need them. What you do need is the honest reassurance that Lloyd's chapter 2 title: A PERVERSE THOUGHT fits the book as perfectly as a drug label round a bottle.

Some of it is even so damn true but unadmitted, it's explosively funny. True bagels (yes, there be bagels here as well as bears), not the ubiquitous 'bagels' like those blueberry fluffies in the vending machine at the Seoul airport, are well and truly heavy as stones, and quite as indigestible. But the things people, uh, bears, do for love...

It's perverse, brave, stirring, as perfectly pitched to the ridiculously real as the Academy of Projectors in Lagado that Gulliver reported; or Nobel-laureate Sydney Brenner's advice in his collection of essays, Loose Ends in Biology: "I have personally found it extremely useful, when dealing with managers, to invert all the catch phrases and exhortations."

Oh, hell. This gem is so "Positively Oothangbartian" I'm not strong enough to leave it out. "There are people getting degrees in biological sciences at the best universities in America today who don't know the names of anything outdoors, who have never studied anything but a cell." -- Jonathan Foley, exec director, California Academy of Sciences ("The Meaning of Lichen" by Erica Gies, Scientific American, June 2017)


Everything seemed senseless; every effort he’d made to be sociable with fellows he had no feeling for at work, every pleasant greeting he’d given to pompous types who could ride The Escalator, seemed futile.
If obedience was its own reward it surely meant that a fellow was waiting for nothing at all, and how could waiting itself be desirable when it took up time? One could wait forever in Oothangbart doing all one was told by fellows in high positions and at the end of it all nothing would be different. Throwing himself down into the folds and dust of his sofa, he lay with his arms covering his head and thought about the Time of Dreaming.

The smallmindedness that reigns supreme now in too many places is torn to shreds and fed to the fishes in this glorious novel. The misfit Hutchinson, one of the unforgettable characters here, reminds me of the great Arctic explorer Fridtjof Nansen, who said “Deliverance will not come from the rushing, noisy centers of civilization. It will come from the lonely places.” And though I said I wouldn't, I must give yet another example of the way this book is like a spiderweb, its triplines reaching out in all directions:

From the 27/6/2017 PBS Newshour interview of Jason Isbell, singer-songwriter and guitarist--"A lot of people that I grew up with, went to school with in Alabama, and a lot of people in my family who told me growing up that cities were terrible places and anything outside of our little circle was scary and dangerous and frightening. And I thought about the effect that had on people, when you start to believe that, and you let yourself be so afraid of other people and the outside world, that you never feel tethered, you never feel a connection with the rest of humanity. So, I wrote that song based on that kind of fear."

Rebecca Lloyd's timeless Oothangbart sings, too. Read it, give it, read it to someone you love in the small time you snatch between... or as Lloyd writes in the Afterword “This book is for people who hate the typical work hierarchy that if drawn as a symbol looks like a pointed white-faced clown hat without the bobbles, and it is for ...” But Lloyd is wrong to limit. Oothangbart, just as freedom, is for everyone.

Finally, I said I wouldn't bring up endless connections, but as there's no penalty these days for lying, there's something else that needs saying and quoting. It's really as remarkably easy to write a book as it is to steal someone's time with mindless entertainment or hypocritical "The sky has fallen!" literature for people with enough leisure to enjoy the mudbath. But literature and life itself can be so much more.

As Rikki Ducornet says, in The Monstrous and the Marvelous (a deeply inspiring collection of her essays)--


I insist: it is not only our right, but our responsibility to follow our imaginations' enchanted paths wherever they would lead us; to heed those voices that inhabit our most secret (and sacred) spaces...It is precisely this capacity for invention that makes the world worth wanting. The capacity to dream very high dreams and to sing--as did the ancients of Dreamtime--songs potent enough to engender a universe. Those who ask us to deny our dreams would pillage our valley of marvels...would deny that the frontiers of the novel, our first love, are infinite.

Rebecca Lloyd, short story writer and novelist, has refused to be denied, and in following her imagination of the possible, has created one of those rare books that becomes a life's companion on the endless paths it opens up.

Amazon
Amazon UK
The Book Depository (free international shipping, though this book should be published in many countries and languages)
Posted by anna tambour at 1:43 pm 1 comment: