The other day I posted it, in all its glorious detail here.
But what I neglected to say is that this is only the face.
What isn't revealed is the spine and back.
What does it matter?
Many spines and backs are given as much thought by publishers as a sweatshop owner does, the workers'. 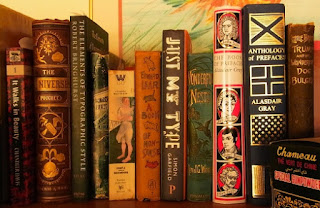 The spine is as important as the front. The spine supports the book. It actually has more work to do than the more obvious front, being for most of the book's life, the view that says, 'Pssst! I'm here!'
A spine can be delightfully sensuous, funny, intriguing, elegant, instantly informative, and as with the back and front, something that makes you want to treasure the book in a similar way to a vintage tea package. A book however, is a package that is always full.
But a book might take that 'package' description as an insult. Crandolin, a personality-filled book with distinct likes and scorns, is positively luxuriating over Askew's treatment.
Note about two spines: One book featured in the picture above is Alasdair Gray's The Book of Prefaces, which has two outstanding and distinctly different covers, both done by Gray (and the flyleaves are also in their own class). This book is a one-of-kind beast that belongs in every library. Its wit will never fail you ("To every generation appears an ageing writer who, with some published work behind him and no ideas for more, decides to produce THE BOOK OF BOOKS"), its passion never fade ("Work as if you life in the early days of a better nation").
I so much admire Alasdair Gray as a thinker, scholar, and fiction writer as well, that when Omnidawn's* collection ParaSpheres came out, with my story next to Alasdair Gray's "Five Letters from an Eastern Empire", I felt a thrill that I still do—partly because this strange person who has somehow never achieved the acclaim he deserves, would be bemused. His self-portrait in TBoP is the look-up-into-my-nose view.

* ParaSpheres was such an ambitious project, and Omnidawn's production standards so high that I have only praise for Rusty Morrison & Ken Keegan, senior editors & publishers. So to anyone who's ever contemplated venturing into the minefield of 'fiction contests', this one you can not only trust, but I recommend going for it:
The Omnidawn Fabulist Fiction Chapbook Contest (open till the 15th of October)
Judge: Jeff VanderMeer
Even if you don't win**, this is an opportunity to take a chance and let yourself write something that comes straight from the truest part of your storytelling self. VanderMeer deserves no less as a judge, you deserve no less of yourself.

** If you don't win, but you've written something magnificent, congratulations! You of course, only want to see it published in some venue you'll want to crow about. I highly recommend John Klima's Electric Velocipede. Both the writing and the art is top quality, and Klima's commitment to support this magazine through the years has been costly to him in all ways. I usually dislike Kickstarter campaigns because most of them are on behalf of people who prefer others to take risks—but this campaign gets my thumbs up because Klima has dedicated years to producing a zine that is a model of style and substance.
EV's cool too.
Posted by anna tambour at 11:28 am