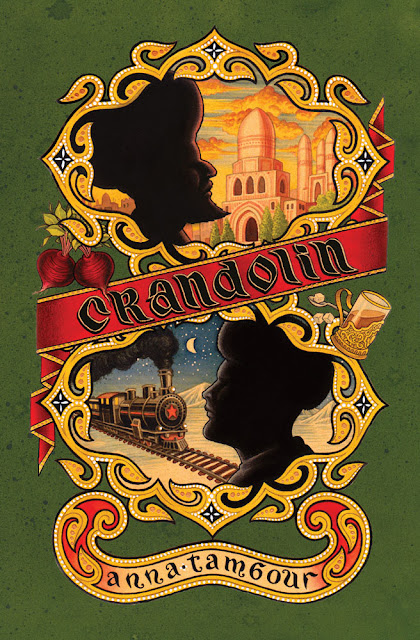 Whether he goes by Christopher Conn Askew, Chris Conn Askew, or C.C. Askew, what he calls himself on his site (where you can buy some of his art), he is a problem. Superlatives don't bring him to justice.

I'm so lucky, not only that Crandolin has this cover, but that Chômu Press is such a special publisher, one that Askew is particularly fond of.

Look at what Chômu's doing these days, where they're making books that are not only beautiful but fun.
See that "bricolage-customised" copy? I advise all people who arrive at Medlar Comfits on "As Olde School as Presto Whip and Wonderbra" to cruise straight over to
I Am a Magical Teenage Princess by Luke Geddes.

&
Of particular note (with covers by C.C.A):
Celebrant by Michael Cisco
All God's Angels, Beware! by Quentin S. Crisp

11 November update: Askew's been working on the cover since this post, and it's suddenly grown even more beautiful. It's the little things that often add the most. My hair roots feel zinged, I'm so thrilled because the cover really gets Crandolin' but everything this artist puts to image is electrifying because he understands and expresses so much, on so many levels. The man's soul has an appendage, a wire with a plug that he plunges into the soul of anything he cares to delve. See for instance, his illustrations for The Master and Margarita.

Hey Anna, I'm not really an art guy but I like that cover! Very cool.

Ethan, good to hear from you! And what's this about needing to be an 'art guy'? The need for one's art to be understood is a ploy of phonies, a studied con. Real art speaks all languages of the heart. As for Askew, he's cost me more sleep than I can reckon. I just love this cover, and he's such a generous spirit.

See more of his incredibilia, such as his visions for The Master & Margarita, and at his site Sekretcity International where you can buy some of his prints.

Perhaps because he really is a great artist, his web presence is shit. He fails to keep us up to the minute with his prints and tattoos, and completely neglect to tell us what he's planning, how many lines he penned today, and what he did this morning between 9 and 9ohfive am. Although he says he loves to read, he could NEVER be a writer (thank gods!)

and Adam, looking forward to the launch of The Schnozzed!

ps to my own post. Askew disturbed my nights not because he has been problematical, but because his cover is so good that I couldn't sleep for the sheer pleasure and excitement of it. Crandolin is rather a bitch to do a cover for, but he did it.

My dear bristly KIY,
Here's a brisk but caring slap to the face with a herring, for what I failed to point out but should be said: Only revealed so far is the face of Crandolin. The spine and back are delights to come for those who have and hold. You will be one of those, but before you behold, do purchase smelling salts.

OverMoon thinking of all the deLIGHTS coming in this abundant preparation~ ~~