Steve Aylett, biographer in the tradition of Swift and Saki 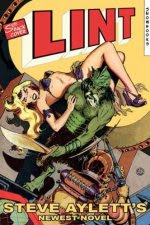 Congratulations, Steve Aylett, who has just earned a review for Lint that I would kill for.

Jessica Hope, writing in 3AM Magazine, says: By no means is this book overly high brow for your average reader — a relief for those of us without Masters, and a great help to those legions of mass market publicists pushing Cadbury, Coke and Aylett to the masses.

Furthermore, Hope writes: Magically and bizarrely, Aylett succeeds in telling it how it is, littering the text with tangents and placing Lint on a plateau of self importance but with absolutely no analytical judgement of the man in question. Bravo! The vast horde of average readers hates authors who shove themselves into the books they write, be those books fiction or nonfiction.

As for the work of reading a biography, Hope gives hope to readers who are bored bored bored by books larded with sharp opinions that zzzzzz into our skulls, with as much sense of humour as a lobotomising drill. Reassuringly, she writes: The life and times of Lint are communicated, in a round about sort of way, and the book is educational and, in parts, mildly funny. A few colourful images of front covers offer light relief.

As for her other comments, I don't necessarily agree, though I think that the comments are tangential to the review itself. She thinks Aylett is too close to Jeff Lint to be objective; and she displays some rather academic hissiness with her comment: And in order to read this biography, you have to be in a club. Sorry, I mean in ‘THE’ club. This is a criticism only to be expected — has a Masters degree in Religion and Political Life, states her bio. Anyone who spends years immersed in and studying clubs can end up seeing the whole world as a pack of clubs, most of which one doesn't belong to.

So hail Aylett! After many years with insufficient recognition, he should be as thrilled with this review as another king was when he finally got butter for his bread. I would suggest that he invite Hope to be his guest at a State dinner in Smaragdine. Jeff VanderMeer might be persuaded to take a break from his Dispatches from Smaragdine, to be Hope's escort for the evening.

And while she's in Smaragdine, if the travel bug bites her, perhaps Hope might review the travel guides from Jetlag Travel.

However, I must admit that I would have liked the review to compare Aylett to other authors who have tended to stay in the background of what they tell. I have always thought of Aylett as a biographer in the grand tradition of those other biographers: Swift, Gogol, Carroll, Desani, Wodehouse, Myles na Gopaleen; and my great favourite, Saki, about whom Christopher Morley wrote:

Saki writes so lightly that you might hardly notice how beautifully also. And here and there, beneath so much enchanting play upon words, you will be startled and embarrassed by play upon hearts. Let me repeat what I once put into the mouth of the 'Old Mandarin' in a pseudo-Chinese translation:

He has the claw of the demon-cat,
Beneath his brilliant robe.
Suavest comedian, silkiest satirist,
Smooth as a shave
With a new razor-blade.

LINT, appropriately being reissued by Snowbooks.