Review of The Company of the Dead by David Kowalski 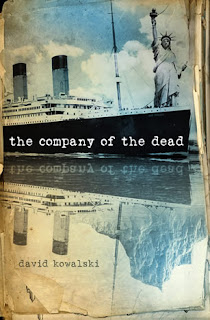 I just posted the review below on Amazon UK, but what I didn't say is that I thought so highly of this novel when it was first published in Australia that I bought a couple of copies and sent them to a couple of folks in the US, hoping that they might review them and then possibly, a novel that should be published there, would be. The problem with that, though, is that this is a book for readers, not reviewers (who must look at 800-page books and think I could read 3 to this 1).

It's a meal and a half. So I highly recommend it for all those of us who love to indulge ourselves. Even reviewers!

Oh, and I should say that I did refer to David as 'the author' in the review, but he has become a dear friend over the years. However, his ability to write a novel plotted better than any war-room or cutting-edge motion-capture, and with seductive flow, doesn't mean I won't criticise that which I think he does poorly. When he wears a baseball cap to try to take 50 points off his IQ, it doesn't work.

Onwards!
Every reading will be newly rewarding

I usually hate both mysteries and twisted history because the mysteries depend on overly complex and ultimately unbelievable contrivance -- and the twisted histories, on simplistic and superficial pop myths we hold to be true. And I have also grown to hate novels that you could use as bludgeons.

So The Company of the Dead should have failed on all counts. Yet on all counts, it failed miserably to dissatisfy. It is a quite enthralling page-turner, filled to bursting with mysteries that are as natural to the story as wet is to the sea; action that you can see and can't help hear as you read; places that are so real, you'll probably (as I have) dream you'd been there; and utterly fascinatingly lethal toys-for-boys (and girls! which doesn't decrease lethality one bit). The author steers us through history with expert but unobtrusive authority. Best of all, the depth of story and characters is quite unmodern, in that this is the Great American novel that Michener would have wanted to write and almost did with his first novel; McCarthy has been trying to but hasn't quite reached, I think, because his novels are too one-dimensional emotionally; and Americans sure aren't likely to now, unless they free themselves of the whirlpool of the Iowa Writers' Factory, Tin House -- and all those schools of artificial artsmanship, posed amorality, and characters who can ultimately, only aspire to be handmaidens to an author's ego.

That the author is an ignorant first-time amateur who isn't even American but whose personality is obsessive about anything he gets into, probably saved him as much as (to name a few) Naguib Mahfouz's, Charlotte Perkins Gilman's, E. Nesbit's, Jack London's, H.H. Munro's, Winifred Watson's, James Tiptree Jr.'s, R.K. Narayan's, Raymond Chandler's, Laird Barron's, Jeffrey Ford's, Lucius Shepard's, Steve Aylett's, and (a novelist I have great expectations for) Jennifer Rohn's life experiences made them creators of what great reads can be, reads that are so multifaceted that they become like true old friends -- always well-met, and yet every time, leaving one with a feeling that there's more under the surface that we've still to appreciate.

This novel could have actually been longer than it is, as there is never a padded page. The characters are larger than the book, which itself, is larger than one unforgettable film. That the author assumes that readers are interested in history, place, in depth of character, in questions of what-if that go beyond celebrity and momentarianism, shows a wonderful respect for the public, and an optimism that I hope spreads further in the book and film trades.

~ ~ ~/
Read an excerpt
&
Have fun at David Kowalski's new blog. His first post is a trip into paranoia:

Email ThisBlogThis!Share to TwitterShare to FacebookShare to Pinterest
Labels: http://www2.blogger.com/img/blank.gif