What doesn't kill you makes you curiouser. 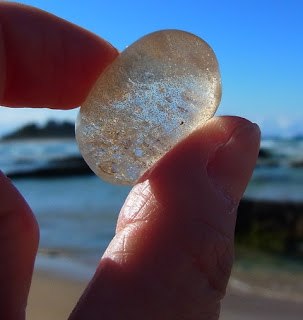 This is the sausage blubber egg mass of the sea snail Polinices sordidus or P conicus (I apologise for my confusion here. I don't know enough to be more specific.) 'Blubber' is an inaccurate term altogether, that opaque white solid mass of fat—but colloquialisms can never be accused of being wrong. This bag of jelly is lipid-free, or at least tastes as such, is quite delicious, and since there is no grain, breaks as easily as any jelly does, into amorphous shapes—each one catching light and glaring out in ways that chandeliers have the rep for, but are feinting imposters compared to this uncelebrated highly perishable blob.

"The oxygen transport physiology of sand snail Polinices sordidus egg masses was investigated using oxygen microelectrodes and open-ﬂow respirometry. P. sordidus eggs are laid in a jelly matrix that rapidly absorbs water and swells into a horseshoe-shaped sausage. The average diameter of these sausages is 37mm. Eggs are enclosed in capsules that are distributed throughout the jelly matrix, but 65% of the eggs are located within 3mm of the outer surface. There is no circulatory or canal system within the matrix so all gas exchange between developing embryos and the environment must occur by diffusion through the jelly matrix."
— from the Summary in David B. Booth's paper, "Oxygen availability and embryonic development in sand snail (Polinices sordidus) egg masses", The Journal of Experimental Biology 198, 241–247 (1995) 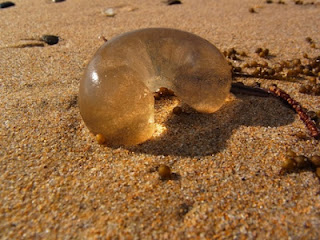 Tossed in a salad bowl with greens, what could be prettier? The taste is purely of the sea, absolutely clean seasalt and nothing else except the light refreshment of jelly. There are only two problems that I see with this as a perfect food. First, it always bears small grains of sand throughout the matrix, which means that those of us who have teeth, must swallow but not chew. And second, I don't have a clue about its possible toxicity. Not that it's ever worried me. Grazing in moderation is only moderately deadly.