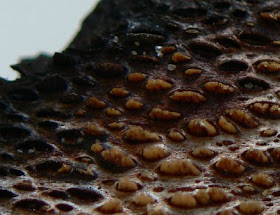 The underside (inner side?) of bark is often more interesting than the outside. While still on the tree but not quite attached, it attracts many spiders such as the huntsman (one of whom appeared on this blog a few days ago, in a space that should have been devoted to beetles) to attach egg sacs. The small space between bark and wood makes a perfect nursery, and prized shelter for many. But even as forest detritus, bark undersides are worth prizing.

This piece (5 cm x 2 cm) has been shed by a coastal banksia, a genus of 76 species and innumerable surprises. Banksias have spectacular bark all the way through, no matter which species. The woods are quite unusual, too. Some, such as that of B. integrifolia, if the bark is shed, look as if they are covered with fine netting. The heartwood is pulpy and could remind you of a cycad.

Every banksia tree and bush is a character, especially the "old man banksias". These gnarled trees have enormous flower heads that invite imagination, to say the least. They don't feel as if they could be made of anything but 1960s plastic. But the "fruits" could give you dreams. They make the trees look inhabited by hairy many-eyed creatures with heavy eyelids and no shyness – they stare. They always look friendly to me, but "big bad Banksia men" star in some of the most beloved stories and illustrations by May Gibbs. 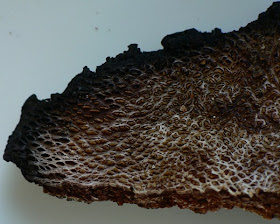